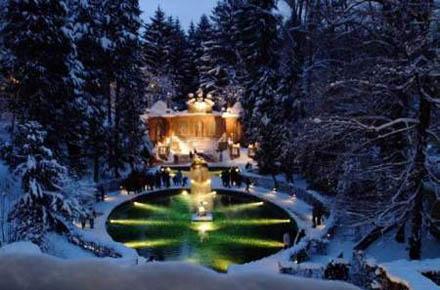 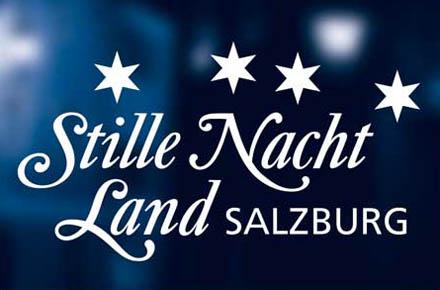 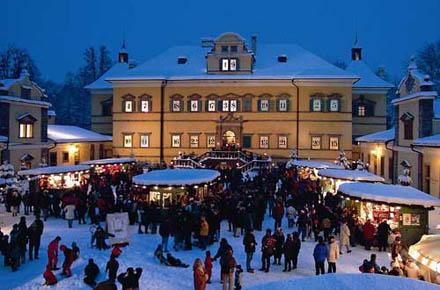 On December 24th, 1818 was the beginning of the unique success story of a song: “Silent night, holy night” This tour to the birth place of the most famous Christmas carol in Oberndorf near Salzburg is combined with Advent at Hellbrunn Palace and Gardens. The Palace of Hellbrunn was once residence of a Prince Archbishop and is now the very adequate noble location to get in a nice mood for Christmas.

Important Info a) Additional hours if possible upon request. Extra hours Euro 95,00/h.
b) Some of the tours cross the border Austria/Germany. Please take the passport with you, it could be checked.
c) Please inform us in case you want to take a baby with you (necessary for the proper child seat).

December 24th, 1818:
In the newly established parish St. Nicola in Oberndorf (near Salzburg) during the traditional Christmas celebration in the church a simple song for two solo voices and choir accompanied by a guitar was sung and heard for the first time: “Silent night, holy night”
At that time for sure no one thought that this song would become the world’s most famous Christmas carol and that it would touch the hearts of millions of people every year. Joseph Mohr (lyrics), an assisting priest and Franz Xaver Gruber (composer), initiated a unique success story. 300 translations in different languages and dialects are known worldwide.

We will take you to the Memorial Chapel. It was built after St. Nicola Church had been damaged by heavy floods. Next to it is the “Silent Night” museum. There the creation and spreading of the carol can be explored as well as the lives of Josef Mohr and Franz Xaver Gruber.

Besides that there is also an area dedicated to the life of Leopold Kohr the famous philosopher and scientist of economics who is the intellectual father of the motto “small is beautiful”.

To get from Oberndorf to Hellbrunn Palace we chose a nice way via Germany. A beautiful historic suspension bridge over the river Salzach connects Oberndorf with the neighbouring German city Lauffen. We will drive through the old city and will have a stop at the collegiate church which is the oldest gotic hall church in Southern Germany.

Hellbrunn Palace was the Summer Residence of Prince archbishop Markus Sittikus. With its Parks, the Hellbrunn Hill, the Month Palace, the Stone Theatre and the Trick Fountains this palace is a living Testament of power, wealth, passion and love for life.

This wonderful location indeed glamorizes the charming Christmas Market decorated with a lot of illuminated Christmas Trees. You will get there at twilight so that you can enjoy the romantic atmosphere fully while it is getting dark. Torch-lined paths in the park with the month palace on the hill above invite for a stroll while you listen to the carols sung by specially selected singers and enjoy the many delicacies. There are also attractions for children – even a reindeer sleigh.

Be the first to review ““SILENT NIGHT, HOLY NIGHT” AND ADVENT AT HELLBRUNN PALACE” Cancel reply