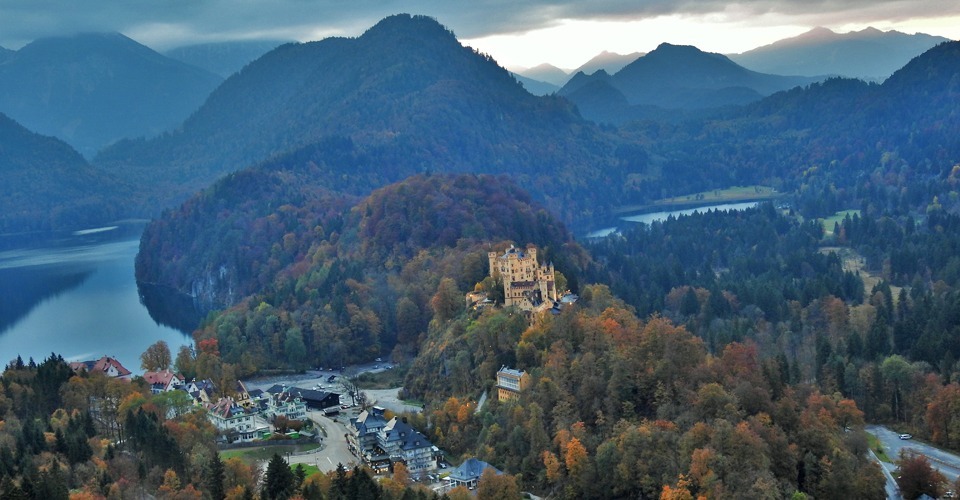 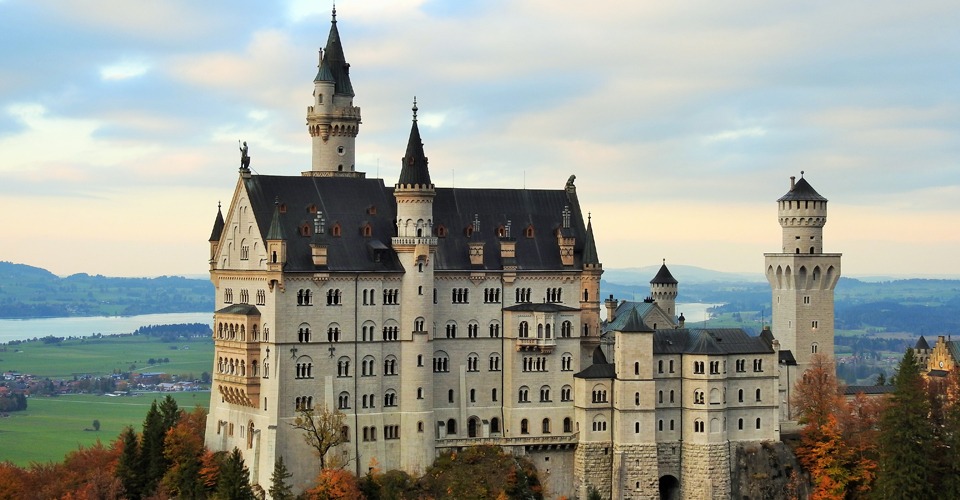 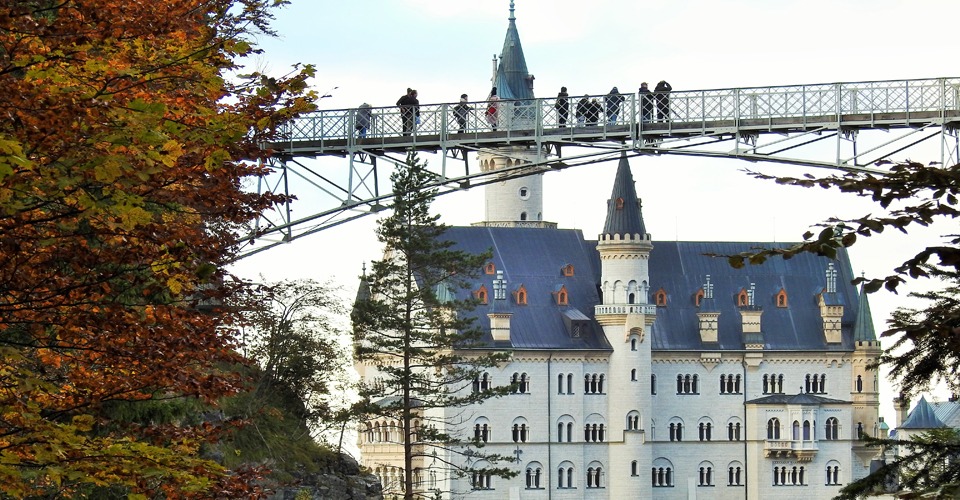 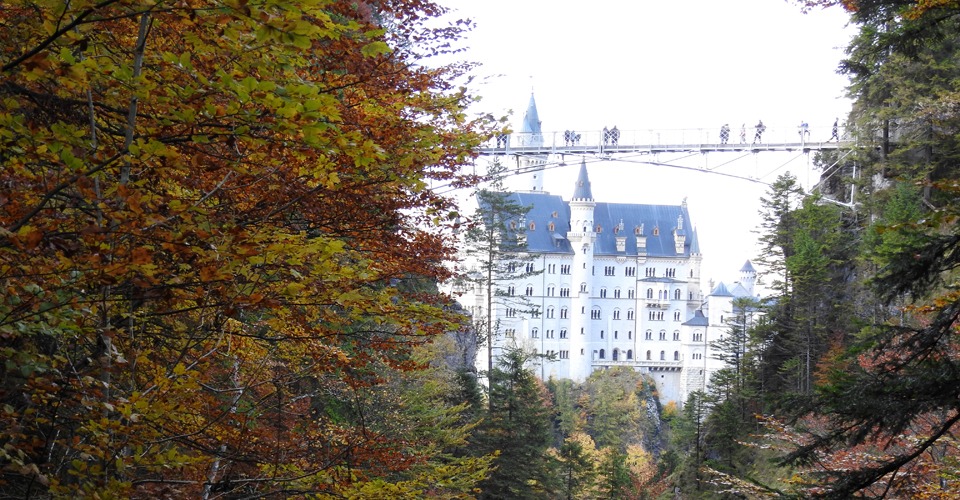 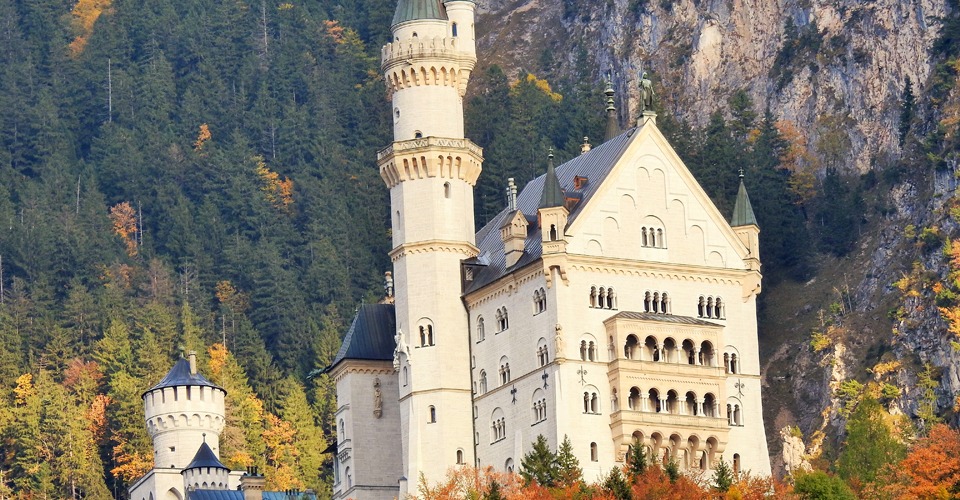 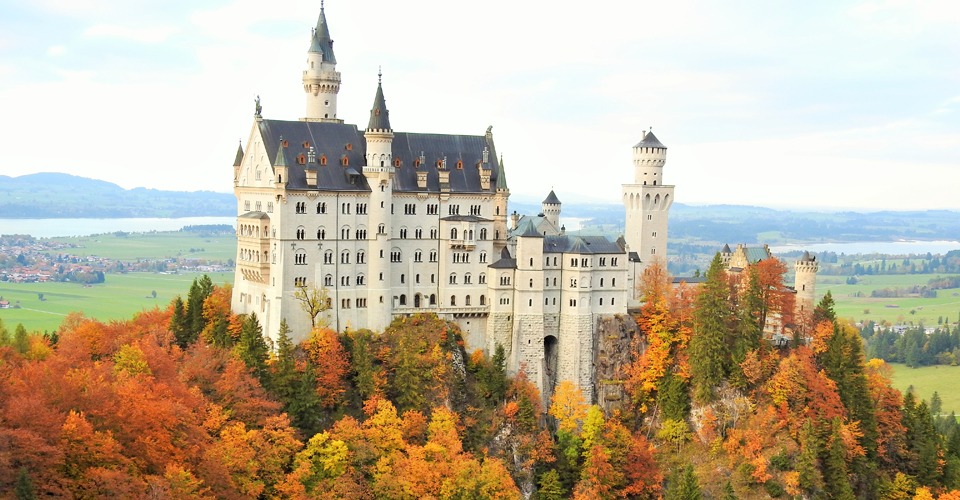 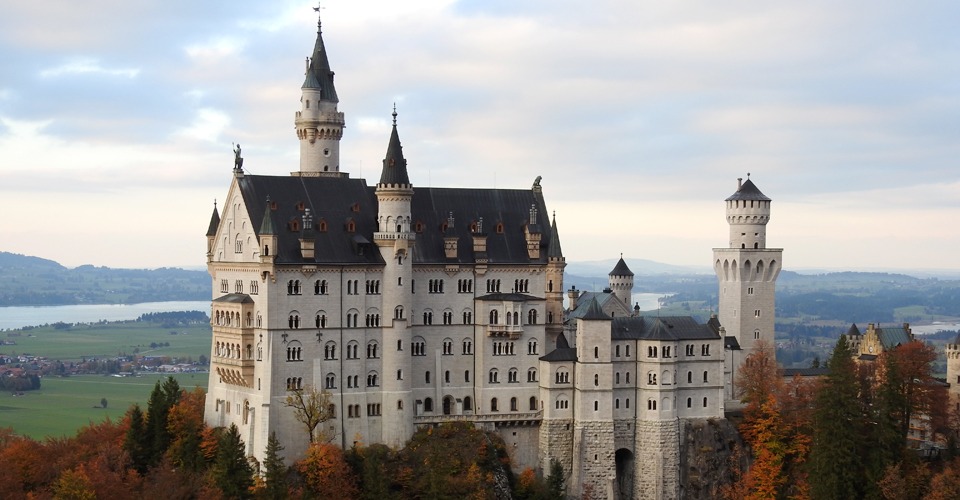 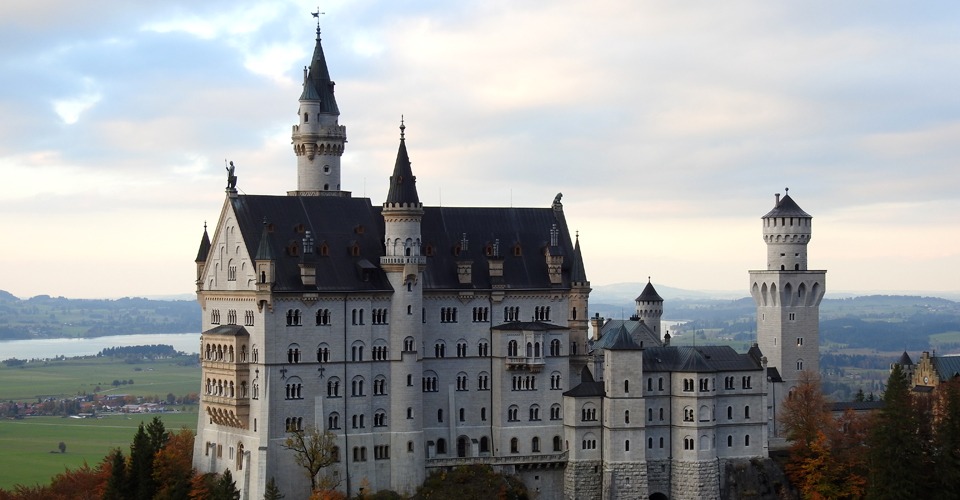 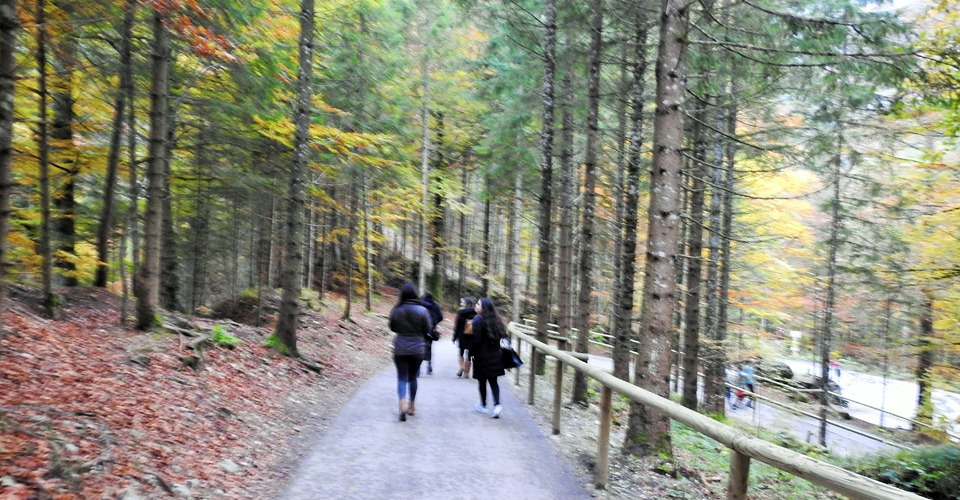 Way up to Neuschwanstein 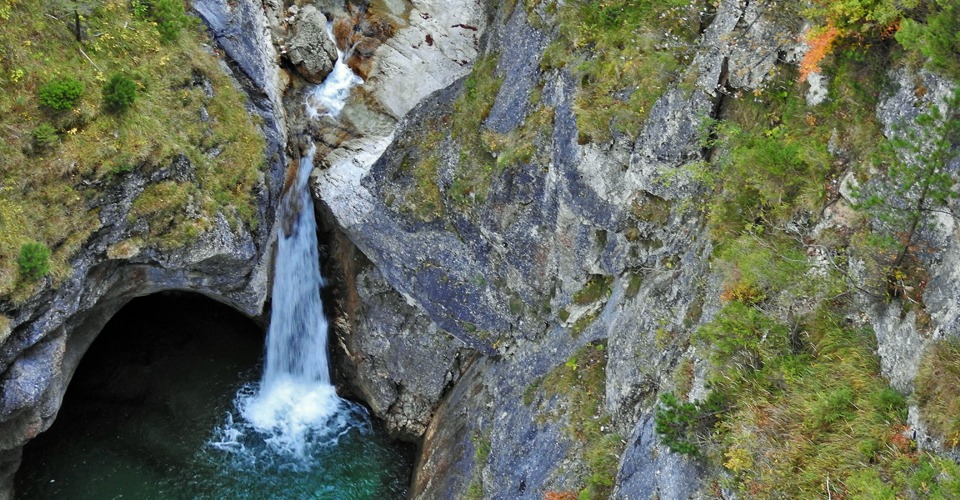 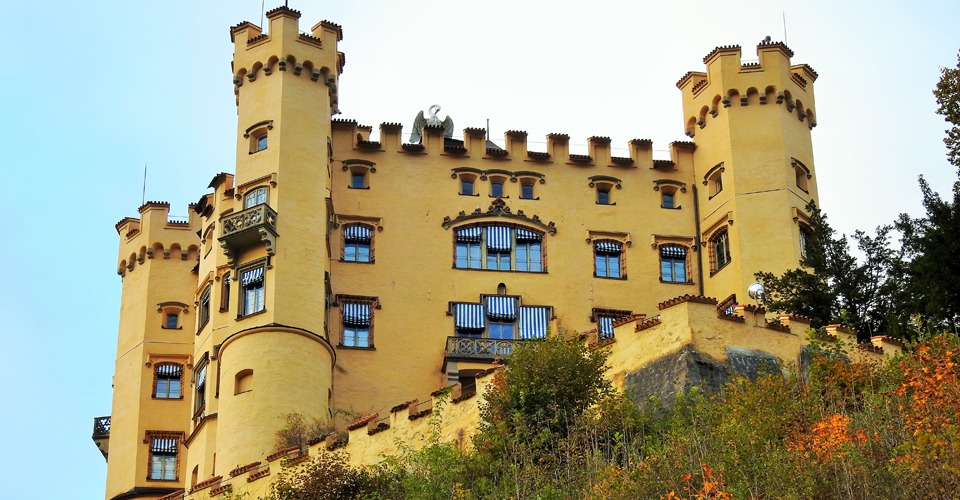 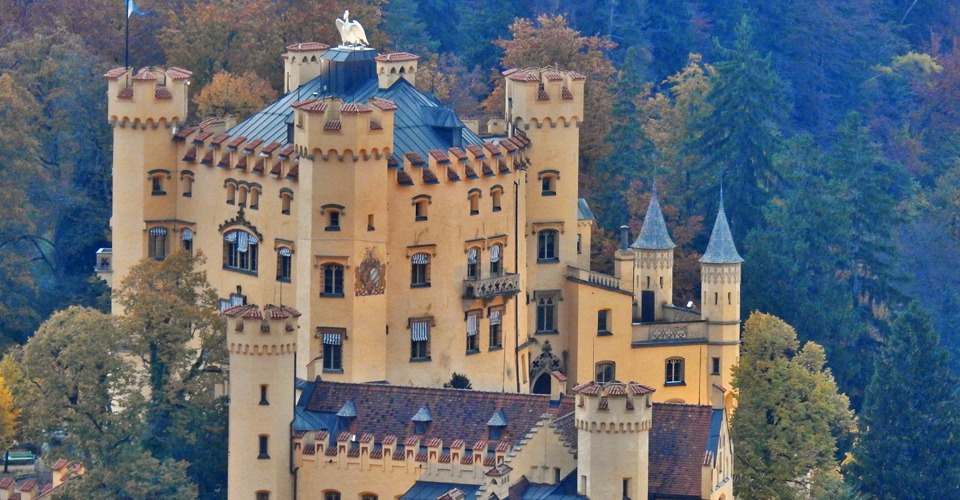 Neuschwanstein is the utter manifestation of the Fairy tale King’s phantasies and dreams and is often referred to as being the most romantic castle in the world. Linderhof Palace, gardens and park are likewise impressive. Together with the most beautiful Rokoko building in Europe, the Pilgrimage Church of Wies, and Oberammergau this tour is as outstanding and fascinating as the eccentric king and his life and the miracle of Wies.

THE SLEEPING BEAUTY’S CASTLE, A DEDICATION TO the French Sun-King Luis XIV. AND THE MIRACLES OF WIES AND OBERAMMERGAU

To enable you to experience the wide fascinating range of the palaces and castles of the Fairy tale King we offer you two tours. One is Herrenchiemsee Palace and Frauenchiemsee, the second one is this tour.

We start from Salzburg and drive via Chiemgau and along Chiemsee, Bad Tölz, Kochelsee to Füssen, a 700-years-old very beautiful town at the southern end of the Romantic Road. It is also called The romantic Soal of Bavaria because of its picturesque location and the highlight of the region Neuschwanstein Castle. On our way to there and to Linderhof Palace we also take you to the famous village Oberammergau and the most beautiful Rokoko-building in Europe, the Wies Church.

Neuschwanstein Castle is King Ludwig II. most famous and romantic castle and attracts thousends of guests every year. Embedded in the mountains of the Allgäu at the southern border of Germany to Austria high on a rock above the Alpsee and close to the thundering waters of the Poellat Gorge it looks like a fairy tale place. Neuschwanstein is the utter manifestation of the kings phantasies and dreams detached from the world and his royal duties, and proof of his dedication to Richard Wagner and his operas.
Often Neuschwanstein is referred to as being the most romantic castle in the world. Maybe thus the Sleeping Beauty Castle in Disney Land was modeled on it.

The interior is as amazing as the whole complex. The Throne Hall is church-like and was created as the Grail-Hall of Parsifal and also inspired by the Hagia Sophia in Constantinople (now Istanbul). The “Singers’s Hall” was modelled on the Minstrels Hall of Wartburg Castle (which exists in reality as well as in Richard Wagners opera Tannhäuser). The woodworks in the kings bedroom needed 14 carpenters for 4 1/2 years, not to mention the opulent paintings, mosaics and furniture and much more. To see the castle inside you have to attend an official guided tour and you can marvel not only at its beauty and extravagance but also at the touching story of King Ludwig’s life.

Linderhof Palace was King Ludwig’s “Royal Villa”, a complex also inspired by his ideal, the French Sun-King Luis XIV. (the other one is Herrenchiemsee Palace). According to that (the French King gave the first and the last audience of a day in his bed-chamber) Linderhof Palace is shaped centred on the King’s bed-chamber. It is located amidst impressive baroque gardens with terraces, cascades and fountains. The adjourning landscape garden covers an area of about 125 acres and merges into the adjourning alpine forest.
The park itself is opulently decorated with allegoric sculptures of the elements, the seasons and the continents. The architectural features are in the style of the Orient (i.e. “Maroccan House” and the “Moorish Kiosk”) and after szenes of Wagners Operas (e.g. “Gurnemanz’s Hermitage”, “Hunding’s Hut” and the “Venus Grotto” (even in his time it was possible to illuminate the grotto and the king liked to row over the lake in his golden swan-boat).

It is a very famous pilgrimage church in spiritual and artistic respects.
On the one hand it origins from a miracle when in 1738 tears were seen on a wooden figure of the Scourged Saviour. This resulted in a rush of pilgrims. To cope with the number of people Steingaden Abbey commissioned a church instead of the former small chapel. The construction took nine years and it seems that the aim was to reflect the miracle in architecture and arts. Wies Pilgrimage Church became a masterpiece of arts and the most beautiful Rokoko building in Europe. Thus it was added to the UNESCO World Heritage List.
As over the centuries many who prayed in front of the statue claimed to having been cured from their diseases it is still a magnet for believers from near and far.

Oberammergau, a small town, is famous in several respects: For the “Lüftlmalerei”, the woodcarvings and the Oberammergau Passion Play.
Lüftlmalerei is a uniqe style in Upper Bavaria to fresco buildings with traditional Bavarian or religios scenes and also out of fairy tales.
Oberammergau has also a long tradition in woodcarving ranging from religious subjects to toys.
But famous all over the world Oberammerrgau is because of the Oberammergau Passion Play which takes part only once in a decade. It hearkens back to a vow: If the region was spared from the effects of the bubonic plague the inhabitants would perform a passion play every ten years (all ending with a zero). Guests from all around the world watch this spectakular event which is a community enterprise. Over 2,000 villagers (more than half of the inhabitants) take part in the performance of the sufferings and death of Jesus of Nazareth.